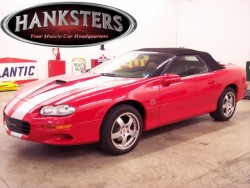 In September 2001, the Camaro was the last true musclecar left on the planet, but nobody seemed to care because nobody was buying them. It must have been because today’s smart car buyers didn’t want a car that was fast and powerful. They also must not have had any interest in something that handled like it was glued to the road or that it could stop faster than a baseball hitting the center-field fence. And they must not have liked cars that still had a roomy hatchback to pile the luggage in on top of a set of golf clubs, and maybe a few tennis rackets too. We guess the hip, new crowd of today likes sitting in noisy, little, cramped cockpits where if you raise your right arm to rub your eye, your passenger gets an elbow in the ribs.

Okay, maybe we’re being a little bit too harsh, buy we just can’t fathom the idea of the Camaro, an icon of Americana for 35 years, being gone. It’s like losing a close friend or even the family pet. For those out there who have never owned a Camaro, the opportunity to buy a new one from the dealer was always there, but that chance was gone now. In September 2001, the last new Camaro ever built rolled off the assembly line. We guess there must be an end to all great things. At least we can mourn for our lost comrade and keep a positive thought that it will return better than ever in the not-too-distant future.

The Best Camaro Yet

The irony of this is so huge it’s almost comical…that Chevrolet would wait until the final year – the 35th year – of it production to build the fastest and best Camaro ever…is a stab in the heart of Camaro purists worldwide. Although, it could be considered a fitting tribute that the final sendoff for the F-Body is the best one yet. It’s kinda like the old saying goes “practice makes perfect,” and GM had millions of practice runs to produce perfection. While not every ’02 Camaro may be perfect, the 35th Anniversary Special Edition SS can lay claim to that title, for sure. Full of power and graceful styling, the latest F-Body is more than just an ego booster. It is actually quite frugal in terms of everyday transportation and can keep up with some of the best of them at the gas pump. By nailing down 19 mpg in the city and 28 mpg on the highway, the SS gets better mileage and makes more power than any true musclecar ought to and puts today’s clunky SUV-crazed market to shame. The standard six-speed manual trans and middle-of-the-highway rearend gearing made it economical and did not sacrifice performance, either.

We knew the American car buying public was far from stupid, and perhaps America truly didn’t need a big, powerful musclecar to carry on the tradition any longer, but it was a shame that the F-Body had to be the one that would go away. The future did not look so bright without an F-Body sitting in the showroom window anymore.

SLP Options for the Camaro Z28/SS

Although it does require that your Camaro come equipped with several, key GM options, mainly the RPO codes WU8 and Y2Y, SLP is offering trick upgrades for these new Camaros one more time.

That means that you can add to your final production ’02 Camaro, some or all of these superior high performance SLP goodies like:

Hanksters.com offers to you this 2002 Chevrolet Camaro Z28 Convertible with SS Package and 35th Anniversary Special Edition Package stock# 02CAM7096. This is a rare find as there were only 739 units made of the 2002 Chevrolet Camaro Z28/SS Convertible Six-speed manual in Bright Rally Red. And, it is an even a more rare find having only 457 original miles. It has been collector owned for the last eleven years (as the owner bought this car brand new). This Camaro is equipped just as it was from the factory. It included all of the standard features as well as some special factory options. The special options are listed below (as per the original window sticker…photos above)

For questions, please email or call.

We have several classic cars in stock, please contact us directly for the most current list of inventory.
– See more at: http://www.hanksters.com/vehicle/4765414/2002-chevrolet-camaro-z28-ss-convertible-35th-anniversary-edition-indiana-pa-15701#sthash.Ifmy1DHH.dpuf This is the Camaro that you have been looking for. This stunning all black 1997 Z28 with the SS package has been garage kept since being purchased. And get this... 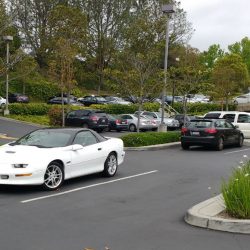 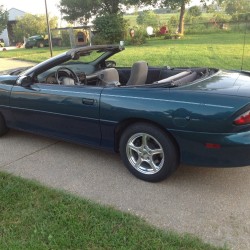 Other items listed by hanksters