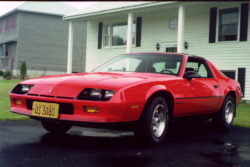 The year was ’87 and it was a great year in music and the movies. La Bamba (Los Lobos)
Livin’ On A Prayer (Bon Jovi)
With Or Without You (U2)
Notorious (Duran Duran)
Played on car radios and stereos.

We were watching movies like:
Fatal Attraction, Predator and Dirty Dancing

Big Hair was the rage….but that was 20 years ago and things have moved on and changed, but this 87 Camaro literally hasn’t changed in all that time….There are very few 87 Camaros in the U.S. (or anywhere) that are like this one! I am the original owner. The 30K is the original mileage. It was used a few years during the summer ONLY; has never seen snow and only saw rain if I got caught while driving! Used only during the summers in New England and only taken out when driving some distance and in good weather. Not parked in parking lots or used for short runs to go shopping. It was NOT on the road every year from 87 to 98, and it hasn’t been on the road since 1998. Due to the weather, previous employment issues, insurance issues, the vehicle hasn’t been on the road. When it hasn’t been on the road, there has been gas stabilizer added to the tank and it was usually run monthly, with the exception of the past few years. The battery’s voltage is low and there was not enough power to turn it over. The tank should be drained prior to re-starting. I attempted to siphon the gas out, but there is something stopping this from happening. Going under the car, there is a piece of plastic that shields one from getting to the hose. I didn’t want to get involved with taking things apart, so I have left it alone. Therefore, the next owner should drain the tank, re-charge the battery (or most likely purchase a new battery) and check the rubber hoses/tires and other things that could use tweaking.
The tires are original and don’t show wear – these are really nice tires with white lettering. There is nothing mechanically wrong with this vehicle the last time that it was run and it was started and driven down the street within the past few years. At this point the battery which has been in the basement will have to be replaced and it might not start right up as it used to. The body should still be in very good shape and has been stored in either garages or under a car cover. The cloth covering of the back speakers has deteriorated over the years and these need to be recovered or left as is, as I have done. Other than that, this vehicle looks as if it was driven out of the dealers lot today. It is such a beauty, that one can admire it without driving in it! I had an Alpine Stereo installed shortly after purchase. It allows one finger operation while driving. Also, a Clifford Alarm System was installed. Because of the condition, this vehicle got looks and comments just a few years after it was made as well as the last time it was on the road – 1988. Original invoice with options available as well as original brochure should be available here and the manual is currently in the vehicle. After driving the car back from the dealer, I literally sat down and read the manual from front to back, prior to officially driving it.

This would be great for someone who had a similar vehicle in the past and wants one now, someone who appreciates the past or perhaps a stock car for a movie set.

Again, the only things that this vehicle would require to be brought up to “speed”:
1.) Drain gas and input fresh gas
2.) Recommend new battery – existing battery will most likely not hold a charge
3.) Check rubber hoses and tires
4.) Replace the cloth coverings over the rear speakers – IF desired
5.) Tune up would probably be necessary
6.) Possibly new tires – recommended anyway since it hasn’t been run/moved 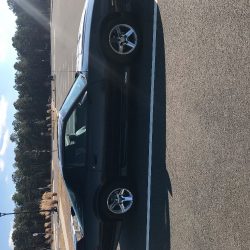 89 pontiac firebrd. Stick shift with a v6. Very low milegae but needs work. Runs but needs the steering coljmn replaced, the muffler needs to be welded back on ...

Other items listed by methuenma